September 2, 2016
By Will Anderson Digital Editor 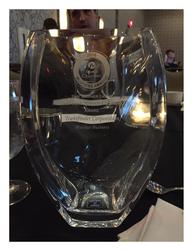 The 23 companies honored in the Austin Chamber of Commerce's 16th annual Greater Austin Business Awards share a dedication to profits as well as community.

Recognition was bestowed Thursday night in a ceremony at the Hyatt Regency Austin, which about 1,000 people attended.

An independent panel of judges sifted through roughly 500 nominees for the awards, except for the "Most Uniquely Austin Award," which was decided by public vote.

"As the voice of business, we are excited to play a role in recognizing local companies who demonstrate excellence,” Ellen Wood, CEO of Vcfo and chairwoman-elect of the chamber, said in a statement. "Having a healthy and engaged business community is vital to our region’s prosperity. It goes well beyond creating jobs for our citizens. In addition to paying taxes that help fuel vital community services, the business community gives back through millions of dollars in company donations and employee volunteer contributions that help lift up many Austinites.”