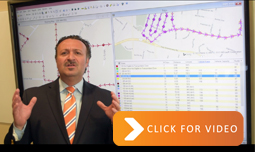 “This release is the biggest in Transfinder’s 27-year history, with the greatest number of new features we’ve ever had in a new release," said Transfinder president and CEO Antonio Civitella. “Routefinder Pro v12.0 has the most enhancements of any release and has been tested more than any Transfinder product to date by the largest Transfinder staff ever.”

Transfinder develops bus routing software for more than 1,600 school districts in North America and the Caribbean.

Routefinder Pro v12.0 has nearly 40 new features and more than 100 enhancements, including simultaneous school routing, allowing multiple users to route for the same school at the same time.

Also included in the latest Routefinder Pro version, every grid now has a map, allowing users to see the grid and the map at the same time, making the product even more user friendly and requiring less clicks.

Routefinder Pro v12.0 also makes it easier for the user to route unassigned students to trip stops and provides access to a “read-only” version of routes to prevent mistakenly modifying records.

“We’re excited about this product and the impact it will have on the way our clients do their jobs,” Civitella said. “And stay tuned for many new Transfinder products currently in the works.”