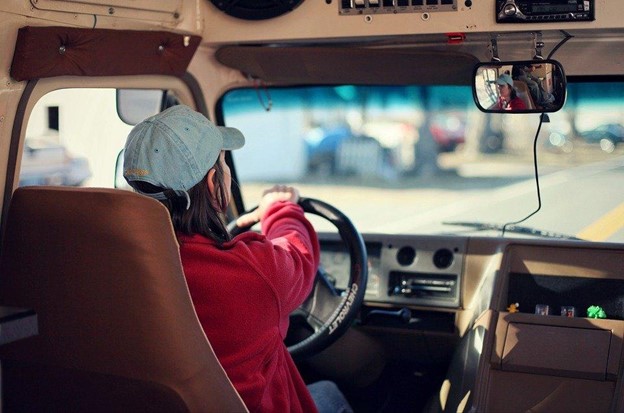 Do School Buses Have Cameras in California?

California school buses are not allowed to have cameras on the bus while it is being operated. In some states, these cameras are used to monitor drivers around the bus as well as the behavior of the driver at train crossings and other mandatory stops. In California, this is not allowed on school buses, so drivers who witness illegal behavior of others near a school bus will need to report this to the police.

Are Seat Belts Required on School Buses in California?

California law has required that buses with more than 16 passengers offer three-point seat belts if they have been made after July 1, 2005. Buses that were manufactured after July 1, 2004, have the same requirements. Priority is given to elementary school students when offering seatbelt seats on buses. State law says that the state cannot charge any person, or school, or district with violation of this law if a passenger does not fasten their seat belt or fastens it incorrectly.

What License is required to Drive a School Bus in California?

When Do You Have to Stop for a School Bus in California?

Per California law, drivers must stop for a school bus if the bus stops in front of them and extends its stop sign and turns on the flashing lights. Oncoming drivers must also do the same. Children will be allowed to get off the bus and cross the road before the school bus driver will turn off the lights, fold in the sign and continue driving. The fine for ignoring this law can be as much as $600.

Do School Buses in California Have to Stop at Railroad Tracks?

In the state of California, school bus drivers must bring the bus to a complete stop within 15 feet of railroad crossings. The bus must stay still as the driver looks both ways and opens the bus doors to listen for a train that might be coming down the track. For locations with inadequate lines of sight, the bus driver must not cross until they are sure that it is safe to do so. Drivers are advised that warning lights and signs at railroad crossings can be faulty or stop working and this procedure will prevent errors of judgment that could lead to the deaths of those on board the bus.

What is the Most Dangerous Area Around the School Bus?

The danger zone around the bus includes the area that is directly around the school bus. The most dangerous areas are the 10 feet in front of and behind the bus. The most dangerous area around the bus is the area immediately in front of the front bumper and the right wheel. This is why there are stop signs on the side of the bus and warning lights to help make sure that motorists don’t hit children that are partially blocked from sight by the bus.

Do You Have to Pay for the School Bus in California?

California is one of 12 states that allow but do not actually require that school districts charge parents a fee to cover school transportation. Costs might vary by school district. As an example, Oceanside charges $360 a student if parents are able to pay. This helps offset the cost of the school bus for the district but is not required for children to be able to use the bus.

What to do if You See Someone Doesn’t Stop for a School Bus?

If you see that someone is not stopping for a school bus, you should make sure to record the license plate of the vehicle and record the intersection and street where it happened. You should call the police and report the driver and give their information. The police will be able to locate the person and discuss the situation with them. This might result in fines or a ticket for the driver who endangered children by disobeying this important state law.

How Much Does School Bus Driver Make in California?

The average school bus driver salary in California is $39,000 a year as of 2021. The high end of the salary is $48,000. The county and city that a driver works in can affect the salary that they will make and time in the profession can also impact the amount that they make. School bus drivers can also ask more for their salary if they have additional certifications related to their job and the safety of the children that are on the bus during their shifts of driving.

What is a SPED Bus?

A SPED bus is a special school bus that caters to transport of special needs children. The size and color of the bus might vary, but districts that offer these buses for special needs students will have to make sure that the bus conforms with the requirements of California law for the transport of these children safely to and from school. For some students, transportation is part of their IEP and is required to be provided to them during their school hours.

How Far Must Children Live from School to be Afforded Transportation?

Children who live 2 or more miles from their assigned school are required to be assigned a school bus before the school district will be required to transport them to and from school. This process can make sure that children who are not able to walk and do not have the ability to be taken to school by an adult can still attend school. In some districts, there will be shared drop off and pick up locations for rural children or children who live collectively along routes that school buses cannot traverse.